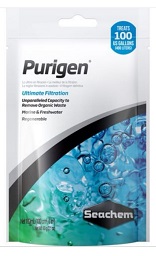 Disclaimer: Images are intended for illustrative purposes only and do not form part of any contract or warranty as to what you are purchasing. See full Terms and Conditions.

SEACHEM Purigen.
Highest organic removal capacity
Possesses enhanced capacity owing to its vast surface area; both spherical and macroreticular
Helps control ammonia/nitrite/nitrate
Color changes as it exhausts; easily regenerated
Seachem Purigen is a premium synthetic adsorbent that is unlike any other filtration product. It is not a mixture of ion exchangers or adsorbents, but a unique macro-porous synthetic polymer that removes soluble and insoluble impurities from water at a rate and capacity that exceeds all others by over 500%. Purigen controls ammonia, nitrites and nitrates by removing nitrogenous organic waste that would otherwise release these harmful compounds. Purigen’s impact on trace elements is minimal. It significantly raises redox. It polishes water to unparalleled clarity. Purigen darkens progressively as it exhausts, and is easily renewed by treating with bleach. Purigen is designed for both marine and freshwater use.

Why It’s Different
Selectivity: Purigen is the highest capacity organic filtration resin on the market. No other products can compare to its ability to clear haziness and polish water to unparalleled clarity. Unlike other products on the market which are simple ion-exchange resins, Purigen is specifically designed to be an organic scavenging resin. When ion-exchange resins are filled to capacity by metals and other contaminants, Purigen has barely begun to reach its potential. Purigen generally ignores simple elemental compounds, having an extreme affinity for nitrogenous organics. The primary source of nitrogenous compounds in an aquarium is waste. Fish, corals, even plants produce nitrogenous waste. Purigen removes that waste faster and more completely than anything else on the market.

Capacity: Purigen’s possesses enhanced capacity owing to its vast surface area. All other resins on the market are purely spherical extruded beads. These beads remain smooth even under a microscope. Purigen is both spherical and macroreticular. It has microscopic pores that increase its usable surface area to many times that of a purely spherical resin.

Regeneration: Purigen can also be regenerated. As it adsorbs waste products, Purigen will change color from a pale blonde to a dark brown, almost black. Once it is exhausted, it can be regenerated with a solution of bleach and water. The bleach will literally “burn off” the organics that have been removed from the tank. Watch out for products that claim to be regenerable with a brine solution. That is the regeneration procedure for ion-exchange purposes. A brine solution will not remove organics. While such resins have a limited capacity for organic adsorption, a brine regeneration process only replaces removed ionic compounds. It does not destroy large organic molecules that were removed, which is the primary function of organic adsorption resins.

Directions
– Rinse before use
– Use in a fine mesh filter bag
– Each 1 L treats up to 4,000 L (1,000 gallons) for up to six months
– Exhaustion is indicated by a pronounced discoloration of the beads to dark brown or black.

There are no reviews yet.

Be the first to review “SEACHEM Purigen 100ml/50g” Cancel reply

What are you looking for?

We use cookies on our website to give you the most relevant experience by remembering your preferences and repeat visits. By clicking “Accept All”, you consent to the use of ALL the cookies. However, you may visit "Cookie Settings" to provide a controlled consent. Read More.
Cookie SettingsAccept All
Manage consent

This website uses cookies to improve your experience while you navigate through the website. Out of these, the cookies that are categorized as necessary are stored on your browser as they are essential for the working of basic functionalities of the website. We also use third-party cookies that help us analyze and understand how you use this website. These cookies will be stored in your browser only with your consent. You also have the option to opt-out of these cookies. But opting out of some of these cookies may affect your browsing experience.
Necessary Always Enabled
Necessary cookies are absolutely essential for the website to function properly. These cookies ensure basic functionalities and security features of the website, anonymously.
Functional
Functional cookies help to perform certain functionalities like sharing the content of the website on social media platforms, collect feedbacks, and other third-party features.
Performance
Performance cookies are used to understand and analyze the key performance indexes of the website which helps in delivering a better user experience for the visitors.
Analytics
Analytical cookies are used to understand how visitors interact with the website. These cookies help provide information on metrics the number of visitors, bounce rate, traffic source, etc.
Advertisement
Advertisement cookies are used to provide visitors with relevant ads and marketing campaigns. These cookies track visitors across websites and collect information to provide customized ads.
Others
Other uncategorized cookies are those that are being analyzed and have not been classified into a category as yet.
SAVE & ACCEPT